Last week, I along with a few other team members were in attendance for our very first Monday Night Raw and the first one televised at the SSE Hydro Arena in Glasgow. Needless to say, it was a pretty surreal experience.  This was my first live event in 10 years so it was a great feeling to enjoy it first-hand, being amongst  thousands of other fans as well as being a part of history.  Overall, I thought it was a pretty good show.  Like with most UK based shows at this time of year, the storylines continue to build steam towards the next PPV (in this case, Survivor Series) and match quality is usually above average.  There were some questionable booking decisions but in terms of entertainment and ‘spectacle factor’ it was very good!  As always, there are a couple of segments or factors that made the show as good as it was, so allow me to share them first hand!

Here are my top 5 moments from WWE Raw Glasgow:

#5: The Amount of Star Power 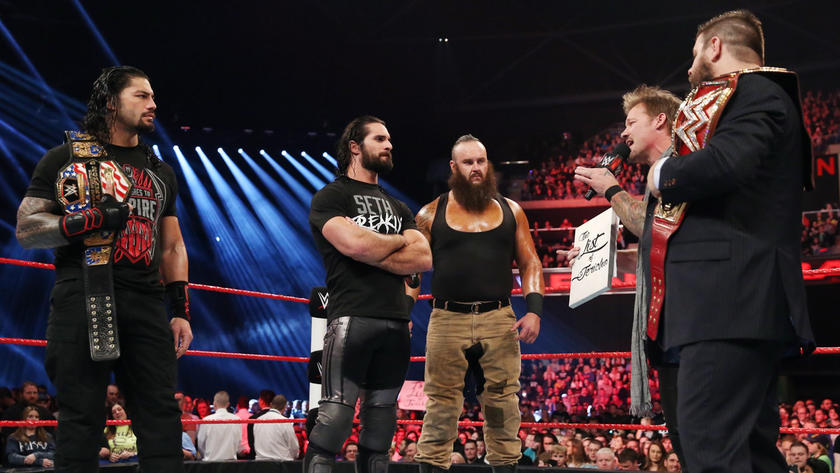 As a fan, you never really know what to expect just before a live event like what matches will take place or which superstars will make an appearance.  Plans can change almost instantly due to injury or unforseen circumstances, but for this Raw, Glasgow got pretty lucky in terms of star power.  All members of the three Survivor Series teams were present and it felt like they made sure everyone would make an appearance.  We had Owens, Jericho, Rollins, Reigns and Strowman opening the show with Stephanie McMahon (no Foley unfortunately) and they finished with a Fatal 5 way against each other, which was announced in the opening segment!

The midcarders got their moment, as did the women, the lower-tier tag teams and even the Cruiserweights.  Not to mention a couple of pre-taped matches for WWE Superstars featuring Neville, Titus O’Neil, Bo Dallas and Darren Young.  So it felt like anyone and everyone got a chance to be a part of the very first Glasgow Raw.  I was pleased with seeing all these superstars showing up and I’m sure a lot of other people were too! 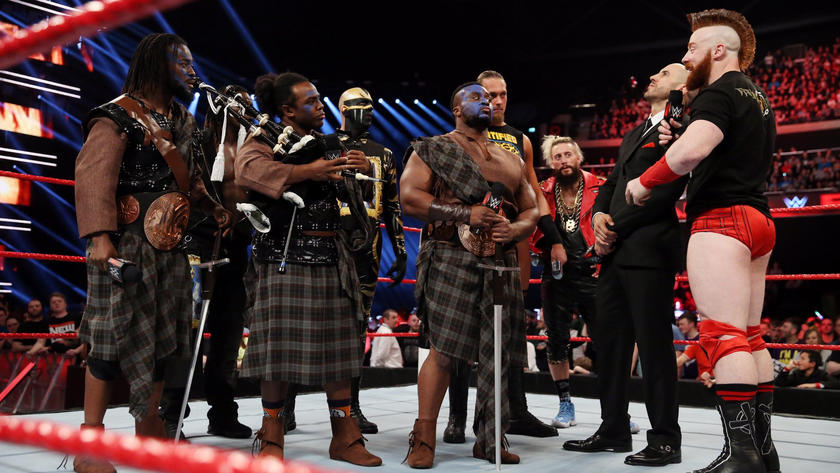 Sheamus sure knows how to wind up a Scottish crowd with his Irish background and love of football!  He played the classic heel tactics of mocking the Scotland football team, and implied that Ireland was a better Celtic country.  He was able to provoke a strong reaction from the crowd and looked pretty cocky at the same time, I don’t see why he isn’t booked like that all the time.  His Rab C Nesbitt jibe towards Enzo Amore was pretty funny as well!  Cesaro’s mic skills, as per, were pretty weak but still got the crowd to chant ‘Shame’ as well as ‘Rooster’ towards Sheamus (in reference to him looking like the Red Rooster). 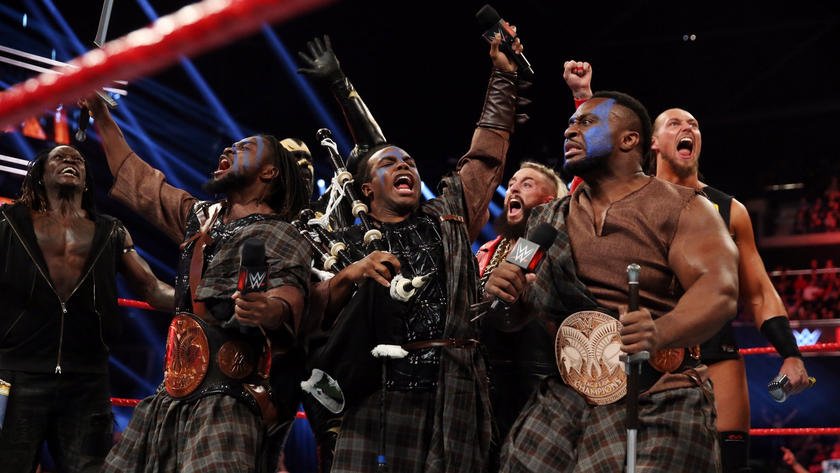 Enzo and Cass are still absolute gold on the mic, mocking Sheamus for his pale white skin, looking ugly and possibly dying alone (Burn!).  New Day, however, are just about invincible! Wearing kilts and facepaint from Braveheart, we got introduced to Agnes, Francesca’s Scottish cousin, a recital of the famous ‘Freedom’ speech from Big E and the crowd was loving every minute of it!  Despite losing to Gallows and Anderson in the next match, they still have a huge amount of crowd support behind them and are very close to breaking Demolition’s tag team title length record.  The sky’s the limit for New Day and they seem to be showing no signs of slowing down.  It was a pleasure to see their antics in person!

When JoJo announced Noam Dar as Brian Kendrick’s partner in the cruiserweight match, the whole arena just about exploded! The home-country hero of ICW had arrived on Monday Night Raw! An already established name in the Cruiserweight Classic, Noam Dar got the reception he deserved.  While the match was not the best I’d seen, Dar’s presence completely made up for it, with the entire crowd chanting for him and ICW throughout.

In the end it was Rich Swann and Sin Cara who got the win with Swann pinning Kendrick with a roll-up.  I could tell the crowd wasn’t happy with Dar being on the losing side in his debut match but booking-wise it did make some sense.  WWE seem to be pushing Swann as Kendrick’s next challenger but that was overshadowed by the post-match promo with Kendrick blaming Dar for the loss despite Kendrick taking the fall.  Dar fought back and got the better of Kendrick in the assault that followed, giving him some much needed momentum.  It was the right place and the right time for Noam Dar to make his debut and despite the tag team loss, he wasn’t the one who was pinned and got one over on the Cruiserweight champion.  A great way to leave a lasting impression in front of a home crowd!

Fans in attendance at a televised live event usually get treated to an additional unaired segment that doesn’t make it to TV just as a little something extra such as an additional match or a comedic segment.  Glasgow got both!  After the show went off air, Seth Rollins challenged Kevin Owens to a match for the Universal Championship which Rollins won via DQ after Chris Jericho interfered.

What followed afterwards was one of the funniest segments I’ve ever seen featuring Team Kevin & Chris, Rollins and Enzo & Cass.  With Kev and ‘Big Chris’ mocking Enzo & Cass’s antics (How’ve you been? How are you? How’s it going?), teasing the crowd with going on The List of Jericho and some brilliant comedy timing from the pair of them makes me so glad I chose to go to Raw instead of Smackdown.  Enzo & Cass once again showed how over they are with the crowd by trading jibes with Owens & Jericho as well as interacting with the fans directly (How you doin’).

It was a great way to end the show after most people were feeling pretty exhausted and it left everyone laughing and in a pleasant mood with some brilliant comedy timing from all parties and some insane promo skills from Owens and Jericho especially! 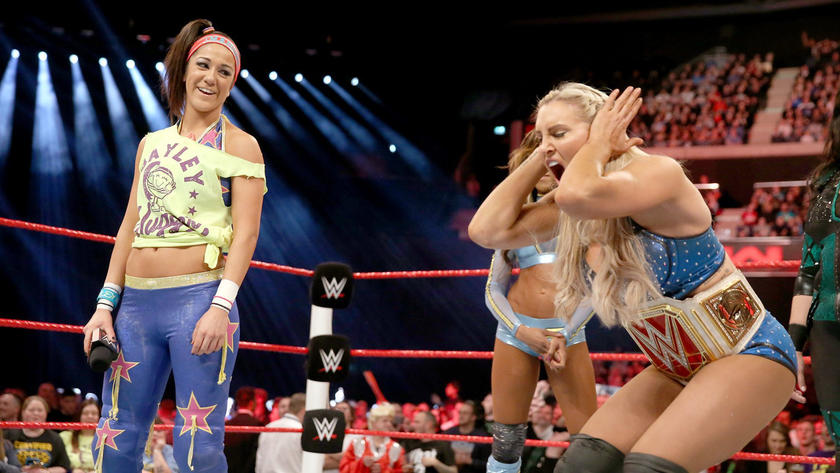 It’s official…Glasgow loves Bayley!  As a WWE crowd, we are often expected to cheer for the babyfaces and boo the heels.  For this segment, Glasgow absolutely knocked it out the park! During the women’s segment which involved all the members of the Survivor Series team plus Dana Brooke, Bayley’s arrival prompted a, now famous, ‘Hey Bayley’ chant in the style of DJ Otzi’s ‘Hey Baby’ song.  It went on for so long that it was clear that even Bayley wasn’t expecting that response! She did look a little flustered from it whilst cutting her promo, but no one really cared, the crowd loved her!

Things got really out of hand when Charlotte was doing her segment, the chant kept on going, interrupting Charlotte, which made her visibly annoyed.  As one of those people doing the chant, I don’t think anyone in the crowd was prepared to stop! It was a pretty hilarious way to show appreciation for a babyface whilst simultaneously annoying a heel at the same time.  Even Sasha joined in at one point which made it even better!

I have seen a few posts on the internet dubbing this segment as a hijacking, but I disagree.  I saw it as an opportunity for the crowd to cheer as loud as they wanted for one of their favourites whilst having some fun at the heel’s expense, although I did feel a little sympathy for Charlotte as you could tell she was getting pretty annoyed.  The full chant lasted for a solid 5 minutes , but the TV editing cut it down to about 2-3 minutes.  Still, it was totally worth it! Easily my favourite segment of the night, due to crowd participation, appreciation for a babyface and the sheer hilarity of it all!