The podcast isn’t a one man band nor a 3MB. We have a top rank team of regulars who help to make Suplex Retweet the product that is it.

Down since day one is H, Kwaku leads as the show’s executive producer, editor and all round technical mastermind.  Kwaku’s knowledge of wrestling spans across several promotions across the length of Scotland. He has also had the pleasure of interviewing some well known names on the circuit.

Currently on a quest to get WWE to bring back pyro, he also has a massive cable package and is the focal point in the campaign to have the first ever ‘Kwaku on a Pole’ match.

David H – The King of Kayfabe

Stacey may have only started watching wrestling a few years ago, but has become an avid follower of various promotions including WWE and ICW.

A massive fan of Total Divas and Total Bellas, Stacey never fails to provide hilarity in quizzes with not only her answers, but with her creative names for finishing moves such as renaming Ember Moon’s ‘Eclipse’ as the ‘Wine Lover’.

Ross – The Advocate of RossCo

Apparently he has a weird obsession with memes about Billy Gunn and claims to have numerous ‘best friends‘ in the wrestling industry.

Sarah is one of our top interviewers and successfully led our FIRST EVER, HISTORIC all women’s show, providing the very best insight into the women’s division of wrestling. Known as the ‘Diva of Discovery’, Sarah has attended many Scottish wrestling shows including ICW, Discovery Wrestling and Reckless Intent just to name a few.

Sarah is also very vocal about women’s wrestling within the industry, which has lead to numerous articles about the subject and is a big supporter of women’s only promotions, like Glasgow’s own Fierce Females.

Scott – The Gullible One

A man with a thirst for gold as high as Tommaso Ciampa, the younger of the McLeod brothers has grown into one of the pod’s most solid panelists.

As well as being the biggest Kane fan of the team, Scott also co-hosts Scott and Paul’s Rambling Podcast where they discuss wrestling, Frasier and of course rambling.

Gary – The Most Soothing Voice in Podcasting

The award winning half of the Kernahan brothers for charity commitments, Gary is never one to turn down a bottle of Hooch.

He, along with daughter Lucy, always provides a great insight into how wrestling has impacted a family demographic. He’s also had the pleasure of attending Wrestlemania 33 in Orlando. Currently on edge about a potential Boss n Hug Connection heel turn and has developed an unhealthy love for Viscera.

A man who was alerted to the podcast by the sound of a mysterious ‘mating call’,  The BIG DOG Allan continues to compete with Ross over who is the bigger fan of The Rock.

Despite this, the newly crowned ‘King of Amsterdam’ has developed greatly since joining the pod, recently interviewing various ICW personnel such as Simon Cassidy and Billy Kirkwood whilst providing the panels with various rants about Brock Lesnar.

Favourite Match: Triple H vs Undertaker, End of An Era Hell in a Cell – Wrestlemania 28

Derek – The Wizard of Whiteinch

Despite his struggles in the ESSR sweepstakes, Derek’s insights into the world of ICW have made him a valuable asset to the podcast.

One of the most knowledgeable of the team on the 80s and 90s eras of wrestling, it should be of no surprise that many believe his niece Lucy gets her insight into the sport from Derek and not her dad Gary.

And he really does love The Kings of Catch.

Strak – The Most Savage Man in Podcasting

Strak’s non-PC opinions and repeated table banging has given Kwaku some sleepless nights when it comes to editing.

With a background in wrestling and body-building, Strak provides an insight into the life of a wrestler including backstage stories and some very blunt and straightforward opinions of the industry as a whole.

One of our NXT experts, Ryan is also the founder of Glasgow wrestling events company Wrestle Events, who put on regular days and evenings for fanatics across the city.

A man who would try and sell you his kidney if he could, he has long suffered in his place of work for his love of wrestling. Despite this, he is still determined to get the team to pay that £40 return to go to Ireland to see OTT Wrestling.

Despite other projects forcing David away from a regular slot on the podcast, he can still be found meddling into our affairs via our sweeps and our fantasy draft. 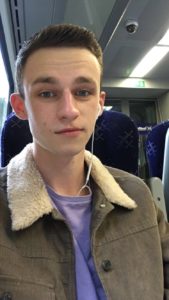 If there is a karaoke night happening you know Jack is going to be there!

Taking his showmanship from his love of wrestling he guarantees a good night out when you are with him.

From watching WWE since he was a wee boy to getting progressively more into the ICW over the past few years, Jack provides a welcome wealth of knowledge to the ESSR team.

Not going to let anyone forget that John Cena followed him on Twitter.

Daniel – Le Champion from a Galaxy Far, Far Away

Another new face to ESSR, this guys has more voices in his head than Randy Orton, and that’s a shoot!

Having spent his life since the age of 6 as a wrestling fan, Daniel comes to us with a wealth of knowledge of WWE, TNA (now Impact) and more recently AEW.

He isn’t afraid to fantasy book storylines and throw in the odd impression.

Just don’t mention Shockmaster or Lana and Lashley around him. He also loves Star Wars, as evidenced by his nickname and victory in the Star Wars Gauntlet organised by a certain GOAT. 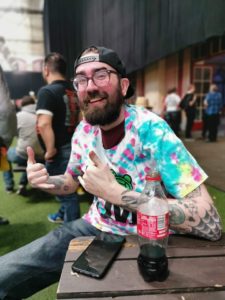 A wrestling fan since before he could walk, Grant was raised in the attitude era but grown into the New Japan era.

A frequent traveller across the UK to watch all different promotions ever since being introduced to Okada Vs Omega at Wrestle Kingdom and making the jump to see Progress Chapter 69 (best number haha!)

Always dreaming of the Tokyo Dome and getting to watch Wrestle Kingdom. Always debating who wins the handsome battle of New Japan between Ibushi, White and Sanada.

Ryan Wilson – The Fat One

Despite only making one official appearance on the main ESSR show to date, Ryan has quickly became a fan favourite and the top babyface on our team!

Ryan asked us to say that.

One of the two Ryan’s to host Takin’ Smack, the only Smackdown review that spends more time talking about sex and dinner than it does about wrestling!

He also has a top five list of female wrestlers he would let…do something to him. Don’t ask.

Nathan – The Fury of Fife

Nathan joined ESSR after a stint as President of the Glasgow University Pro Wrestling Society – of which he is also a Co-Founder – much to Kwaku’s dismay.

After taking bashings from the rest of the panel for being a former GU student and/or always finishing in second place, Nathan is on hand to talk all aspects of wrestling and cites the Attitude Era as being his favourite era of our great sport.

He is also classed by many of the pod as the most handsome member of the team.

The only Glasgow uni panel member that Kwaku actually likes, which isn’t an easy thing to achieve.

The absolute maniac that is Andy Mitchell has provided great insight into the life of a wrestling trainee as well as showing off how fashionable he is with his collection of turtleneck sweaters.

A keen eye for detail, Josh’s ability to break down a wrestling match always provides a central point for discussion anytime he is on the pod.

Lover of all things heel turns, James is always prone to a hilarious rant or two anytime he is on the panel.

A WWE mark through and through, his ability to go off onto numerous tangents has led to some memorable moments on the pod. May one day risk the wrath of Dave Meltzer.

7 thoughts on “The Team”